Yet another ebay find. It is essentially a fixed lens toy camera (think fuji holga). The electronics are dead but they did nothing more than move a aperture disc inside, a very narrow f stop at that. The shutter is similar to a holga, and disassembly is similar too. 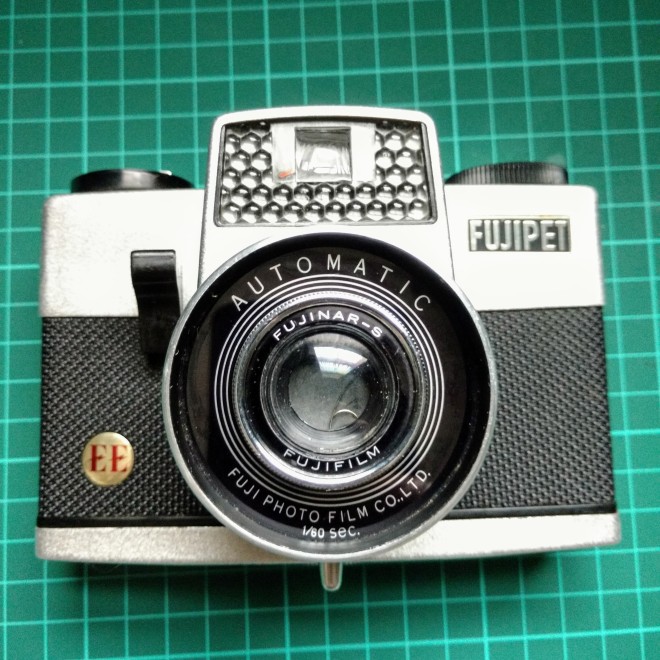 Anyway here is my test roll from around Nottingham today between coffee, beer and ‘States of America’ exhibition at the contemporary. 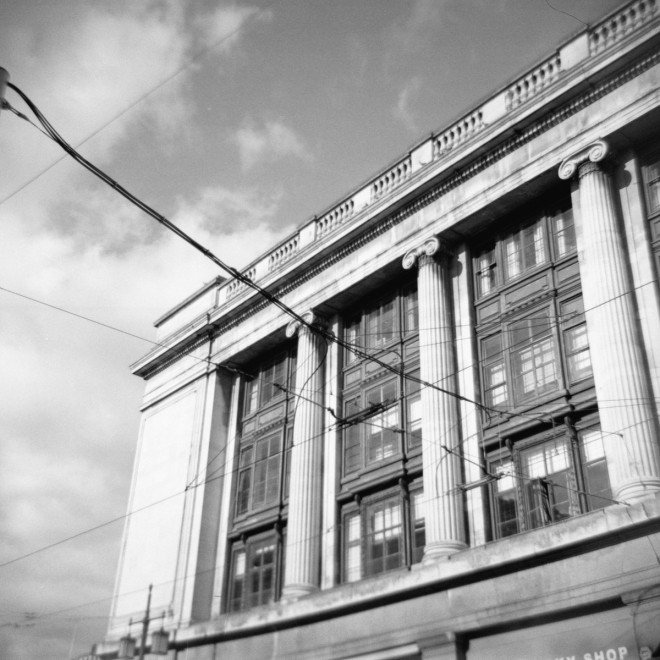 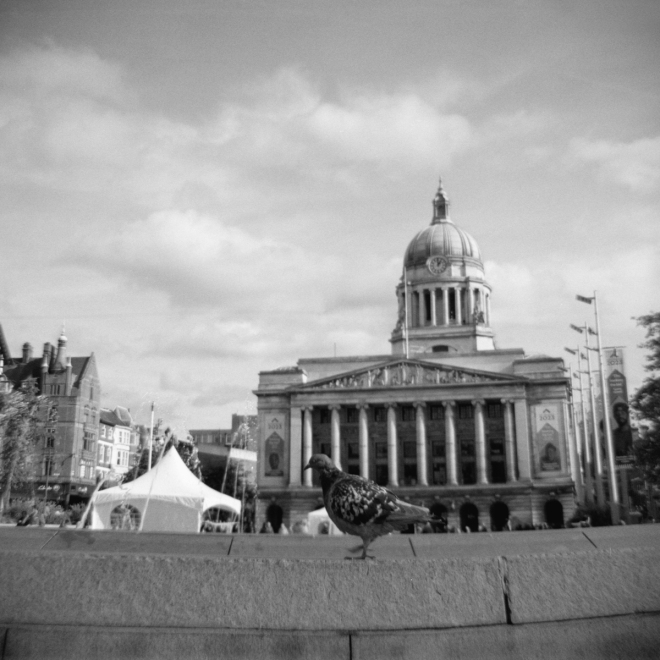 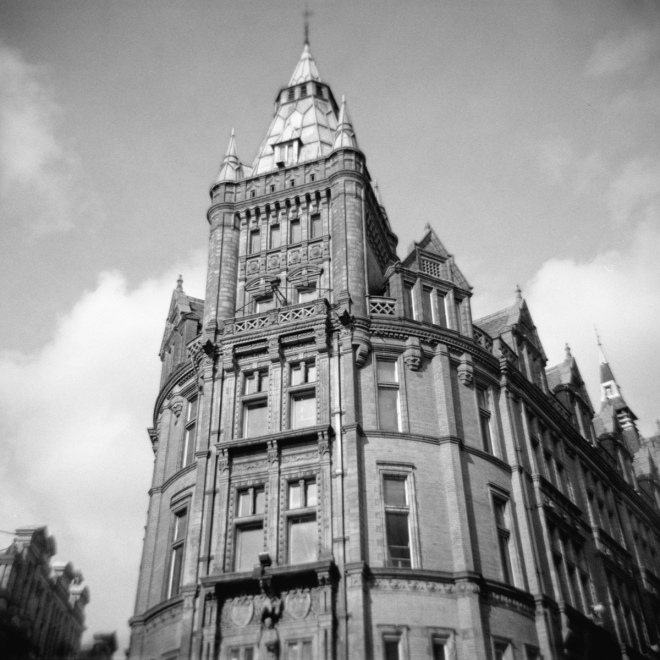 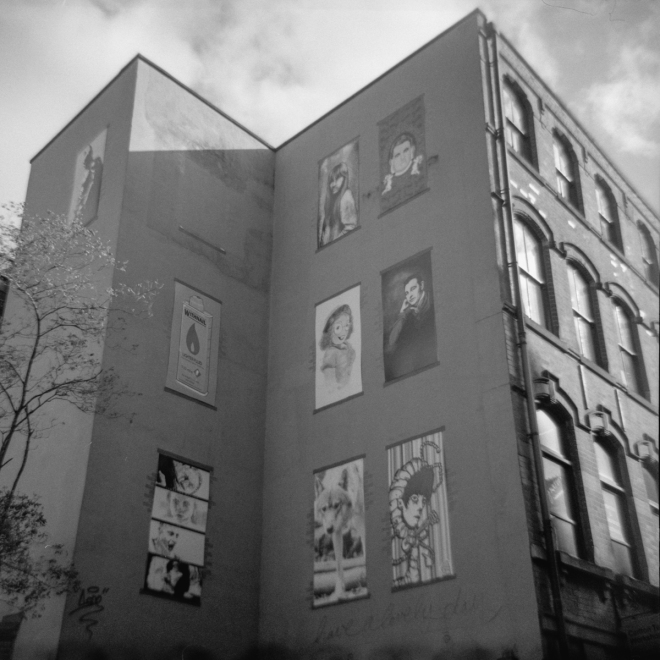 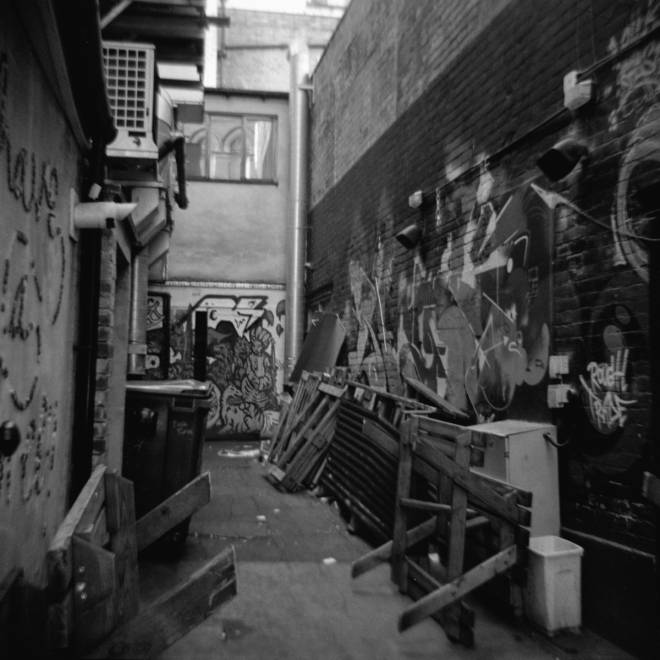 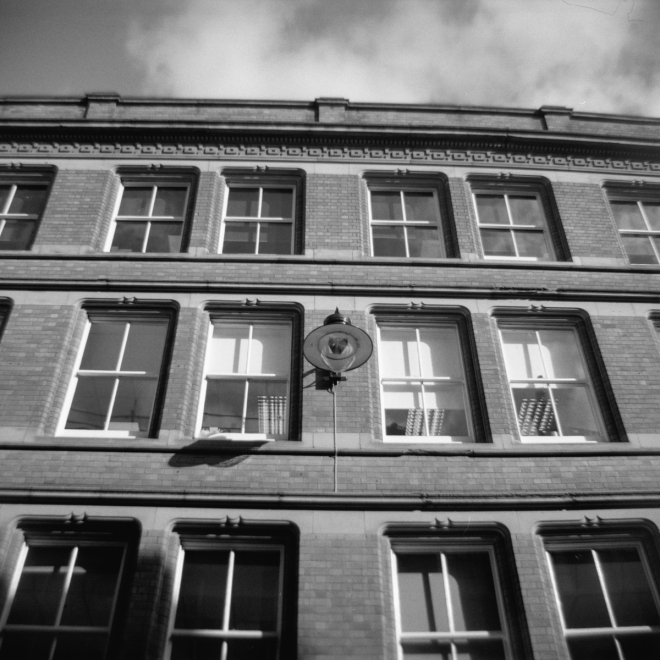 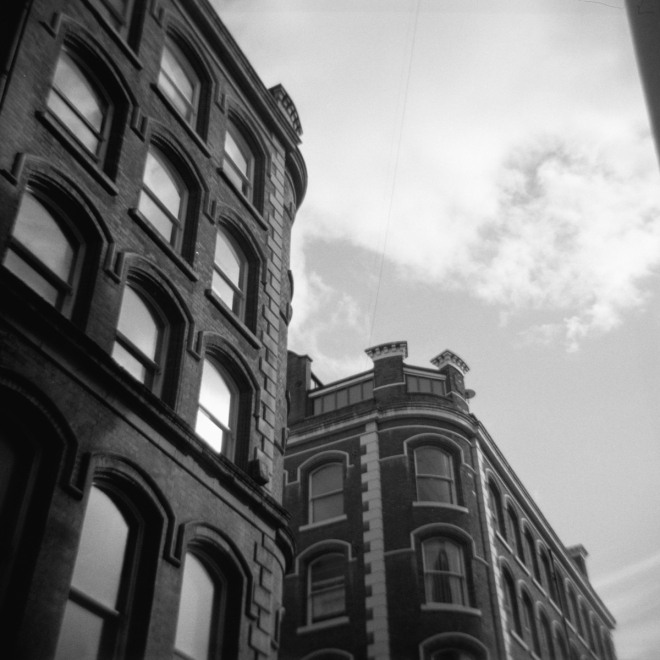 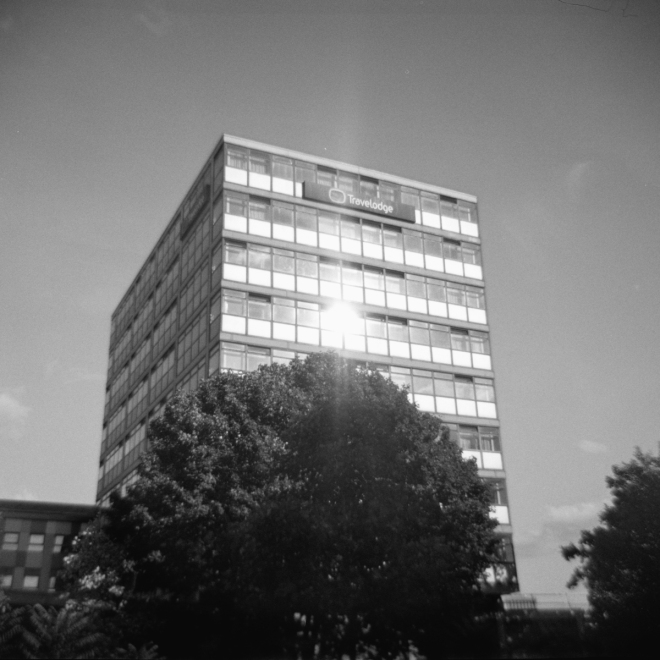 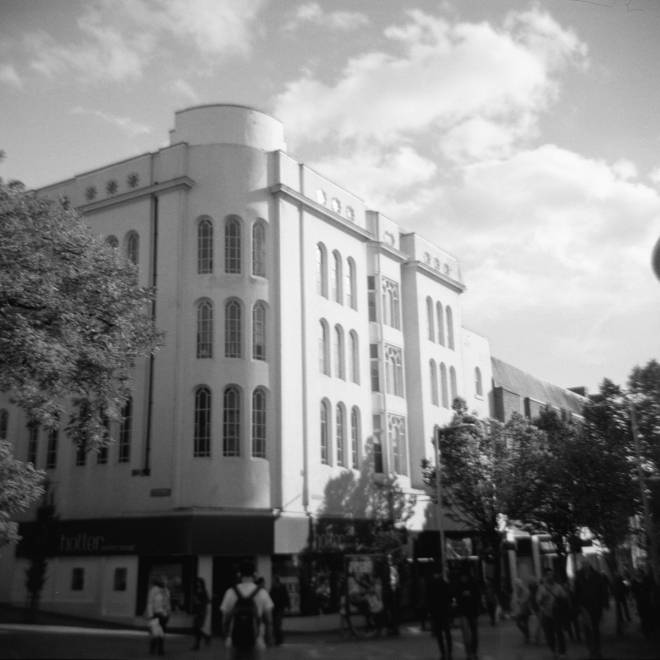 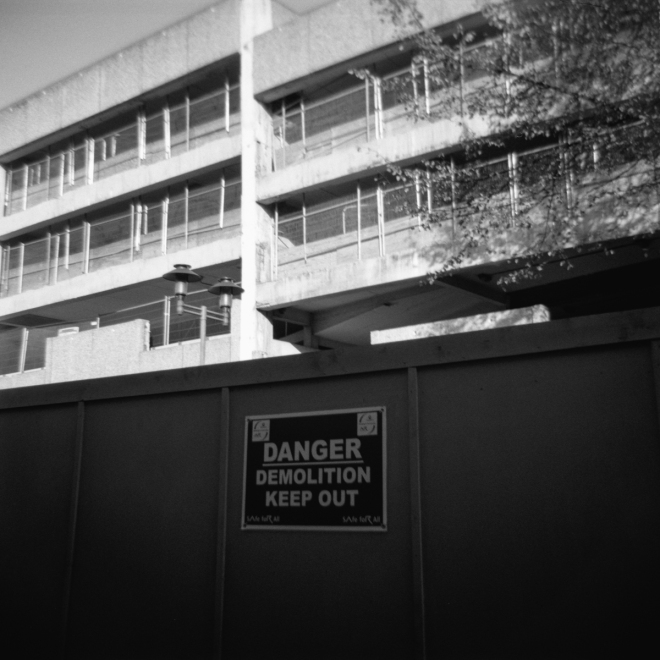 Stuff I saw in Nottingham with a Fujipet EE

Last week I revisited an old favourite spot for landscape photography. I have made many photos on this field/hill ¹ ² ³. I wanted to finally try my noon pinhole camera while the weather was nice and bright enough for pinhole photography.

This isn’t a review, but here are some thoughts on the camera. The craftsmanship and finish of the wooden camera is nice, but could be better by polishing all four sides of the camera the same colour. That said, it looks good on a shelf. It would make a nice gift for a photographer. Appearances and build quality aside, and with practicality in mind, its a little bulky. A spirit level is absent (I taped one on) and the body doesn’t have composition aids, things you find on the excellent reality so subtle cameras. The shutter, a simple sliding piece of felted wood, is okay in that it works but once or twice while walking it would slide open by itself despite being relatively tight against the wood. The pinhole itself looks efficient and clean with no defects. The back of the camera features a hole for frame numbers which I taped up, not trusting it on a very bright day.

The images the camera produces are sharp enough, not to a reality so subtle standard, but fine in pinhole terms. The images also have vignetting issues, commonly found in most pinhole cameras that don’t curve. The vignetting seems very pronounced at the top of the frame, rather than the usually balanced subtle drop off towards the centre which is often the case for pinhole photography.

Here are a few images taken on expired kodak ektar and souped in, what I didn’t know at the time, exhausted c41 developer. Lots of funky colours which I tried to sort out on scanning the film.

Noon do not make this particular model anymore, instead they make a more refined version which appears to resolve some of the negative aspects such as size and weight. I should also note as this is more a hand made item, rather than manufactured. Logically each camera and it’s results will be a little different from one to the next.

I don’t think the camera is practical, it lacks composition aids and seems overly bulky making it awkward to use. It is however a solid working camera with simple moving parts and no electronics, that will out live most film cameras.

This is a motion picture film that has been ready spooled into 35mm canisters by the people at nik & trick. It comes in a reclaimed canister with old school kodak labelling.

Films like Schindler’s List, Raging Bull, and the monochrome parts of Kill Bill were shot with this film stock. It has a rich cinematic history.

Shooting the film- no surprise, I underexposed. Instead of the native 250iso, I shot it at 800 so that I could carry on using my usual hyperfocal focusing technique (I usually shoot at 1600 for this). Additionally I used a yellow filter.

I developed it in hc110 dilution h 1:63 for 20 minutes, a time I figured out based on the 400iso times. The roll came out with too much contrast, crap for printing but okay for scanning. I was expecting grain having seen images on flickr of punchy grain riddled images at even 400iso. Maybe I’ll mix rodinal into the hc110 next time for a more gritty look, especially if I do some street photography.

The following are from 2 walks.

The images have a broad tonality with shadows keeping lots of detail even with a yellow filter. The film, when paired with hc110, has a nice look to it. I want to say it has a indie movie quality look to it, but that’s a given -its motion picture film.

I have been holding off posting this, as some of the images I am using for neopantastic. As its post week, I don’t think it matters now.

The following was taken with my leica m2, voigtländer 35mm f/2.5 + yellow filter, with bergger pancro 400

The following was shot with fuji acros 100 and a oly mju ii.

Stuff I saw in Nottingham

On Wednesday we went to upper padley, in the peak district. Rather than taking my usual hiking setup of a tripod and a pinhole camera, I took my gas stove instead for hot drinks. As a lightweight alternative I took my holga, my m2, and film.

I know the place well enough now, so at times I found myself shooting for shallow depth of field and getting close, something that I don’t normally do. I don’t normally shoot wider than f8 unless the subject calls for it, such as a portrait in a busy environment.

I’m not that happy with the images, but it was a nice walk with the leica.

I have yet to develop the film from the holga, if it comes out okay in development, I’ll share in a second part.

Stuff I saw at Upper Padley

Last night I tried c41 processing at home.  I found it to be much faff and less enjoyable than black and white processing, but this morning, after processing more rolls, I think I have the process down.

I have the BelliniFoto Monopart C41 Kit from nik & trick. It features a developer, a bleach, fixer and a stabiliser to wash with. The main differences from a black and white process are the temperatures, which are much higher at 38c, and with this kit there are no water washes.

My main reason for getting a c41 kit was to finally process old colour films and to try the process. I stopped mostly shooting colour film towards the end of 2014 and started experimenting with black and white films, so there are a few colour films hanging about waiting for development.

The following is a complete 120 roll of ektar that I exposed with a holga pinhole camera on a trip to kent, 2015.

The following are the best bits from 2 rolls of agfa vista (re-branded fuji stuff) spanning 2014-15, featuring two camping trips. I think they were shot with a contax 139q, and a Carl Zeiss Planar T* 50mm f/1.7.

It looks like a tumblr blog, is that still a thing?

Currently burning more agfa vista 200 in my oly mju ii. I want to see what a freshly exposed pushed film will be like.

My forgotten rolls of colour film

This film is something special, a totally new film with two emulsion layers.

I am really impressed with the amount of detail it can hold in the shadows when underexposed, and how much detail it retains in the blown highlights. Scanning and processing was a little tricky, I always scan for neutral tiff files and then batch edit with a curve later on. The neutral scans were muddy in the shadows -its like the film retains details too well, and it took me awhile to sort out but I had to curve down the blacks a lot more than I normally would with HP5.

Speaking of hp5, the images are similar in tone but the grain is very different. Up close the grains are smaller and there seems to be more, probably because of the 2 layers.

I developed the film in my go-to HC110 at dilution B for 9 mins at 20c as recommended by Bergger in the data sheets (though, on the box there’s no HC110 data.) The film has to be fixed for a longer time than most films and it drys very straight with no curling.

The images were shot with my leica m2 at 400 iso and are a mixed bunch.

The images have really nice tones but can I push the film to 1600 for some zone focusing street photography?

Stuff I saw, Lincoln in March

This is the first time I’ve ever ran 35mm through a medium format camera shooting for sprockets. I want to see if the wide, slightly panoramic, frames are worth it by burning 35mm through the holga. If so, I might use it for my project.

The results show a lot of messed up compositions where I should have had the camera either lower or more to the left. Its hard to judge what will be in frame or not. The images I took are around Lincoln.

I don’t think I will do it again, it was fun but the whole point of shooting the holga is that its a lightweight portable camera with the benefit of medium format. Its also hard to judge what will be in frame. I also wasted some film by winding on too much. I originally judged that 2 rotations of the winder were enough, but this turned out to be too much, I probably should have done 1 and a half turns.